From April to September 2016, I worked alongside three other artists on the Chatham Placemaking Project. This £4 million government-funded regeneration project will improve the route between the train station and the bus station by the waterfront, making it a better place for residents, workers and visitors.

Together we created a programme of activity along the route, engaging with the local shops and businesses, a school, and the people of Chatham. I developed ‘Chatham Patterns’, drawing inspiration from architectural details and stories from the route for illustrations and repeat patterns. The designs included the pointing arm of Thomas Waghorn’s statue, ironwork from the train station, stone detail from the Alexandra pub, ropes and propellors referencing the dockyard, Egyptian style deco from the old Burtons building, and a nautilus shaped climbing frame nicknamed ‘the snail’, famous for trapping children during the 1980s. 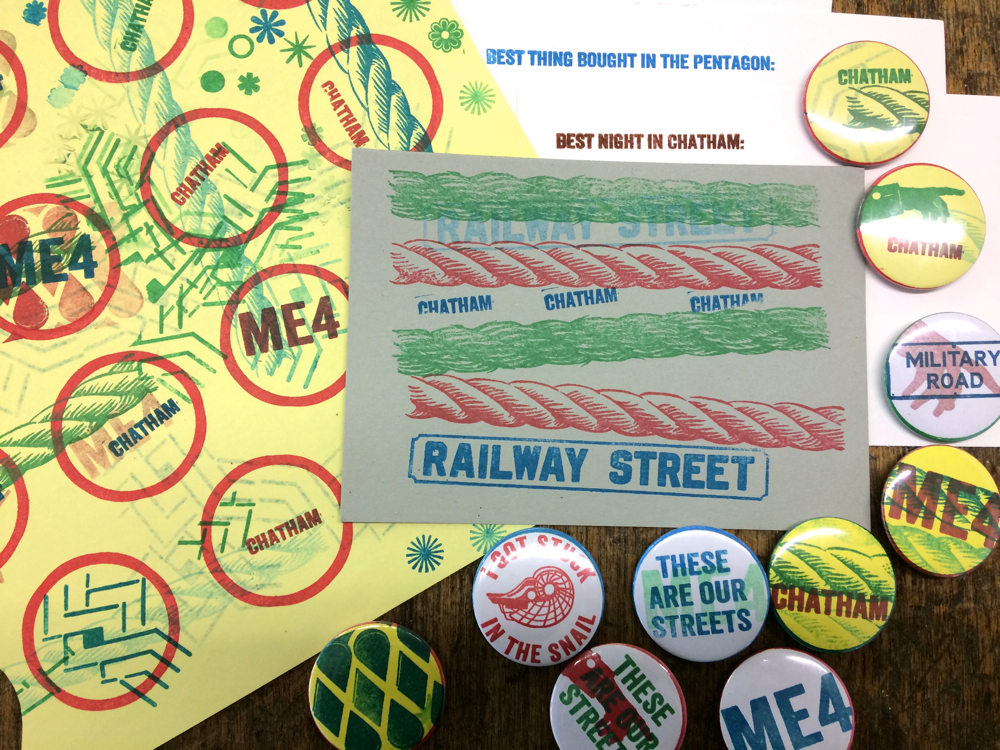 These patterns were first used in a public engagement activity inside the Pentagon shopping centre, where I encouraged people to create postcards and badges by rubber stamping the designs. People chatted to Rob, Christopher and myself – sharing their stories from the route, and we showed them archive photographs of the area.

The public also got hands on with my Chatham patterns during the summer’s River Festival, where they could screen print combinations of the designs onto tote bags and flags.

The patterns appeared in Simon’s short films, broadcast on the big screen by the waterfront, and I liaised with local shops to install them in windows around Military Road and Railway Street on the route. Mask Flowers, Nucleus Riverside Hub, Woods Designer Menswear, STOP Communications and the Post Office let me install a variety of electronically cut vinyl patterns in custom colours.

In collaboration with Rob, I created an artist’s book of top tips from Chatham voices. We also worked together on a workshop with St. Michael’s RC Primary School, developing stories and illustrations. Children from the school were filmed by Simon, wearing T-shirts that I had designed with the patterns spelling out ‘CHATHAM’.

I also collected images of ‘tools of the trade’ while working with the shops and businesses along the route. Some of my illustrations found their way into elements of the permanent artworks, as lead artist Christopher developed his approach using influences from all three of the temporary commissions.

More information on this project can be found on the FrancisKnight website. It was Highly Commended in the category for Best Use of Arts, Culture or Sport in Placemaking, at the Planning Awards, 2020.